Many of the best moments in Tuscany and life occur by happenstance. A moment such as this occurred when my husband and I went for an espresso and dolce a few weeks ago.  We recognized a man from a social event at Christmas, although we had not been formally introduced.

The Cafe proprietor seated us at his table, although others were vacant.

One comes to appreciate that in Tuscany, Tuscan’s have not lost the desire for conversation or meeting someone new. In some parts of the world this may be considered uncomfortable, why would you sit with someone you do not know?

I’ll tell you why, I met a modern-day renaissance man this way.

Lorenzo spoke enough English, my husband enough Italian to make the conversation flow. Lorenzo had a marvellous sense of humour, using his hands to punctuate his points as Italians are known to do.

Originally from Florence, he lived in San Gusme the majority of time, previously worked in the high-end shoe industry, purchased portions of the medieval village from his cousin and restored them. Eventually, Lorenzo asked, “Would you like to see the restorations?”,  “ Of course we would ” I replied and post a quick call to his spouse, out came Daniela.

As she approached, I thought to myself, if Lorenzo and Daniela were marble, they would be in a museum. He was as handsome as she was beautiful. Privately, I wished I had applied my lipstick that morning….

After a short walk, I stepped through their doors and knew I would come out the other end with a fresh understanding of Italian design.

Lorenzo explained in detail how he had restored the space, reused as many original items as possible, created new purposes for items, or made what was not available. We saw his work: his paintings; carvings; sculptures; pottery; items to be refurbished; woodwork; discussed design elements and so on and so on. There are ancient terra-cotta roof tiles hanging in the kitchen, one with an Italian “naughty” joke (scritto in italiano volgare), one inscribed “ fatto illo primo mattone A. D. 6 aprile 1691”, (made this first brick  Anno Domini  April 2, 1691) and another from an ancient palace in Siena dated between 1200 – 1800.

Lorenzo saw use and beauty where others may not, I confess to feeling a tad…un creative.

His voice warmed when he spoke about the influence of his parents on his life, his children and his obvious muse, Daniela.

On our way to the wine cellar (of course he has one) we admired his antique tools, a wood fire pizza oven he built, a cool cellar room with a table to enjoy a meal and wine on a hot day.  All surrounded by art he created and remnants from his families past. Did I mention these rooms were previously used to house the animals (heat rises). 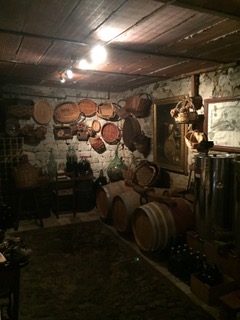 In the wine cellar he spoke proudly about his parents and the regional red wine award (1926) they had won. Lorenzo produces this same wine for personal use and created his own label which was very humorous.

Lorenzo does not sell any of his creations, but did show me one item he was donating. Movie buffs will appreciate his 1952 mint green Vespa that sits in his front room, it is the same Vespa model used in the movie Roman Holiday starring Audrey Hepburn and Gregory Peck.

An original window from the restoration, it has not lost its purpose.

I asked Lorenzo, “ What is on your life list? ” His response, “ I would like to be featured in a magazine on Italian design.” Even the multi talented have a life list – do you know any design writers?

I am not an art expert but I have a deep appreciation for what is beautiful both in the human form and manmade form. There are times in life when you meet someone or see something that inspires you. Your soul simply feels fuller as a result,

Thank you Lorenzo for the inspiration!

*** Lorenzo / Daniela do rent l’ appartmento (the apartments ) with a view. To be clear, I receive no renumeration for mentioning this, just the joy of knowing you may stay in this beautifully appointed medieval space. http://www.borgosangusme.it