The volcanic (tufa) stones “crunched” and scattered from beneath my shoes as I scrambled down the pathway leading from IL Prato.

With hand bag grasped in my left hand, map folded under my right arm and keys jingling in my pockets, I was left thinking “ I need to be better organized in the morning.”

My husband was already piling into the driver’s side of the vehicle (adding to my rush) as I adjusted the metal latch on the chestnut gate leading to the parcheggio (parking).

The chestnut gate and fence were hand-made by Sergio the Villa’s Tuscan gardener, a true ‘uomo della terra’ (man of the land). This talented gentleman cut, trimmed and shaped the posts/rails and made a special “concoction” to both beautify and protect the wood. He assures us it will be in place for “almeno 20 ann” (at least 20 years)”

The fencing simply glistens in the sun and enhances the natural beauty of the environment. The gates are always closed on the property in an attempt to keep the wild boar (Chinghali) and other animals from visiting at night. Thus the sign, “All Are Welcome” does not apply to the Chinghali.

Today, we are off to Pienza the romantic hilltop village which finds itself beautifully positioned between Montalcino  and Montepulciano while firmly ensconced in the Val d’Orca. Both Pienza and Val d’Orca are designated UNESCO sites (World Heritage Site and World Cultural Landscapes). As Mark Twain surmised, “The Creator made Italy by designs from Michelangelo.”

We like to do the “loop” travelling from Villa Arceno  through the Crete Sienese often stopping at the Abbey of Monte Oliveto Maggiore a large Benedictine Monastery. The monastery buildings mostly of red brick stand out against the clay and sandy soil of the Crete. We pass through the Val d’Orca and the drive provides contrasting views between the chalky coloured clay hills of Senesi with the beautiful emerald-green rolling hills of Val d’Orca , however both areas lie beneath brilliant blue skies with “marshmallow like” clouds. 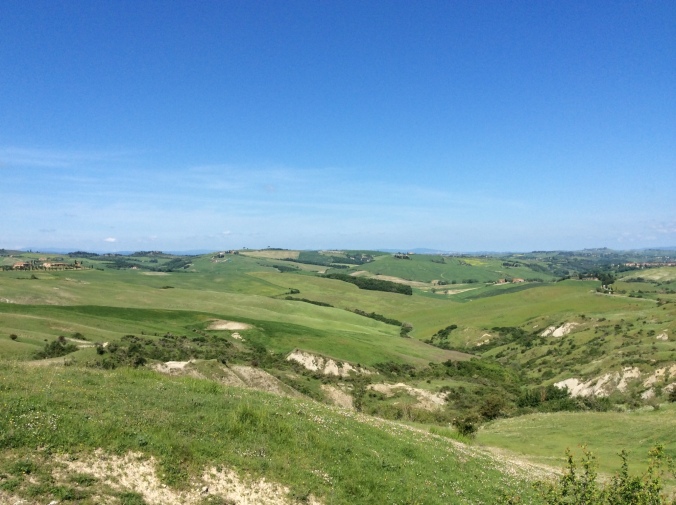 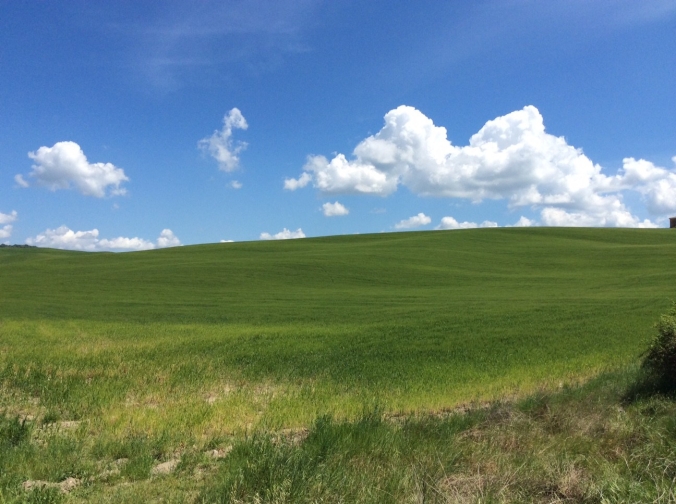 The stalwart cypress trees and iconic umbrella pines line entrances which meander up the driveways of working farms as well as, Villa’s both large and small.

The vineyards and olive groves give way to picturesque pastures and farmlands where the stars are no longer grapes and olives but rather the animals of Tuscany and their surroundings.

The white Chianina beef cattle renowned for their bistecca steaks softly graze as their long tails swish the flies from their large behinds and the Ewes (female sheep) who produce milk for the famous pecorino cheese dot the fields, moving in tandem with their flock. If farm animals are in close proximity to the highway, I notoriously ask my husband to “pull over, just for a minute”. I had accompanied my father Stuart Allaby  to various farm yards (cattle, pigs, poultry, horse), 4-H competitions, and agricultural exhibitions as a child and he instilled a healthy respect for farmers and their animal residents.

Sheep in the distance.

I spied sheep dotting the rolling hill in the distance and I was hoping for a friendly encounter, maybe a scratch behind the ear, a pat on the head (not mine the animals) and so on. David gradually pulled the vehicle to a stop and pleadingly said “ten minutes only” as I climbed from the seat. 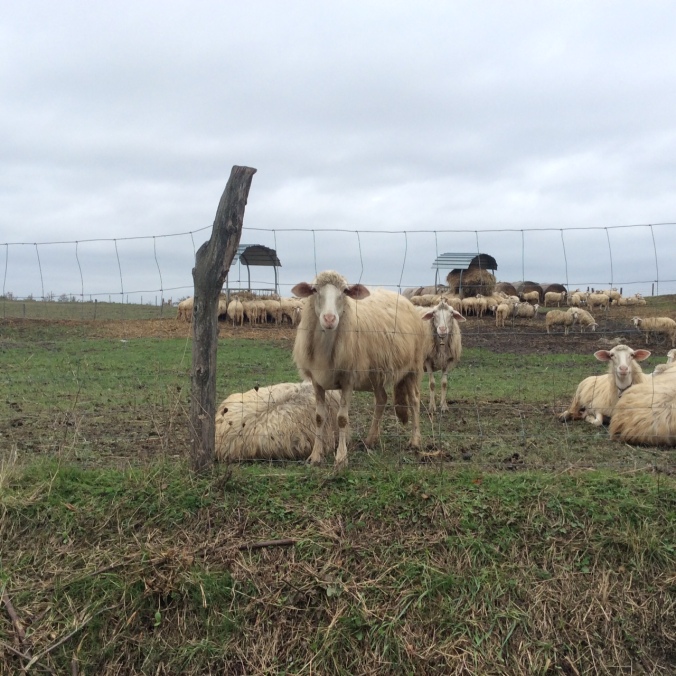 I wrangled up the embankment and stood staring at an elegantly coiffed Ewe, the apparent leader of the pack. She stood staring  un-blinkingly at me while chewing slowly, slowly the food in her mouth that moved from side to side. Frankly it was unnerving and I finally blinked, breaking her unflinching gaze. As I turned, I proceeded to slip down the embankment and now my knees looked like the Ewes with two perfect brown circles of dirt.  “Never mind what the Ewe is thinking, just carry on, don’t look back.” 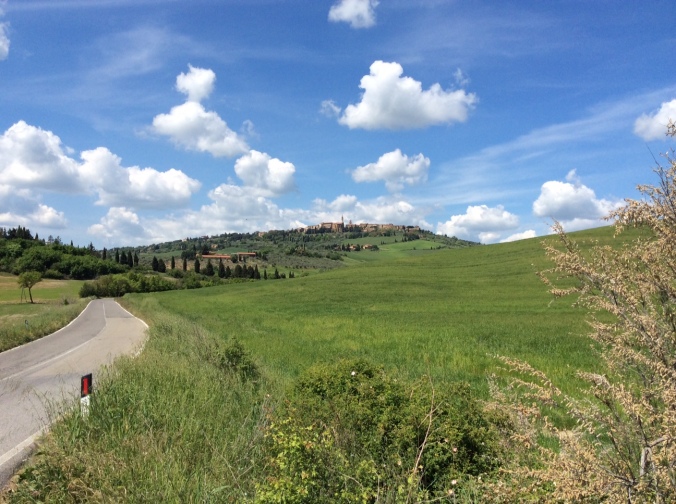 Pienza in the distance

By the time we arrived in Pienza our visual senses were in overload. We parked in the lower parking lot where the small outdoor market is held. Then walked up the small hill and moved along the cobblestones to a pretty park that sits at the entrance of Pienza. A group of elderly gentleman were sitting and talking to their bench mates, hands flying as they accentuated critical points, while enjoying the cool breeze rippling through the trees.

Pienza (formerly the humble village of Corsignano) was rejuvenated between 1459-1462 by architect Enea Silvio and commissioned by Pope Pius II (Enea Silvio Piccolomini) to transform his birthplace. The result is magic with a perfect renaissance village being born.

As we entered Pienza we find the unusual trapezoid shaped Piazza which leads to the bustling central alleyway of Via Rossellino. The medieval buildings have a soft honey glow in the sun.

Four buildings align the piazza: the three leveled Palazzo Picolomini which has loggias on all floors overlooking a wonderful Giardino  all’italiana (Italian Renaisannce Garden) with the magnificent Val d’Orca  and Mont Amiata as its backdrop; the Duomo  (Cathedral) with its early renaissance facade; Palazzo Vescovile the bishops accommodations and Palazzo Comunale (town hall).

The Palazzo Vescovile has a decorative ledge which is just at the right height for us to perch, relax a moment and get out of the Tuscan sun.  We sit and watch the art students who are busily capturing the Duomo  with diminishing pieces of charcoal. Tourists saunter bye taking a few discrete looks at their progress.

The main alleyway Via Rosselino is simply enchanting; lined with charming shops filling with tourists and decorated with flowers in terracotta  pots at every turn. It is understandable why Pienza was chosen as the location for the Franco Zeffierelli film, Romeo and Juliet. This romantic setting is further heightened by two alleyways that often evoke tactile responses from its visitors; Via dell’Amore (street of love) and Via del Bacio (street of kisses). I stop and offer to take a picture of a young couple who happily kiss, giggle and hug under the sign Via dell’ Amore. Others take selfies   while kissing on Via del Bacio and I grab a hug and a bacio (kiss) from my beloved, as we continue our walk with arms tucked around one another. Bellissimo (very beautiful).

Breaking the love potion, is the distinctive smell of pecorino cheese which permeates the air. Pienza is affectionately called the city of “cacio” (cheese) for good reason. I am in lactose tolerant heaven!

We move in and out of shops selling various types of pecorino, wine, olive oil, fragrant soap, local spices, leather goods ( gorgeous hand-made shoes) and brightly hand painted ceramics. I purchase some pecorino cheese with tarfufo (truffle) and pepe (pepper). During a prior visit to Pienza a funeral was taking place in the village. The shop owners locked the shop doors, turned off the lights and bowed their heads stating “silenzio” (silence) as the coffin carried by villagers went by. How respectful.

We stop and talk to a local artist who is displaying her recent works. The brightly coloured landscape canvases sit in the alleyway while leaning against her home.

We decided to finish our visit by walking down Via Della Fortuna (way of luck). This is where our initial discussion about living in Tuscany began. I recall it vividly as we sat looking over the incredible scenery of the Val d’Orca having a cup of hot chocolate. The heavenly liquid was so thick, our biscotti literally stood straight up in the ceramic mug. The sun was warming our faces, the flowers in bloom were draping over the soft ocre walls as “loved up”people walked back and forth. We talked about what “was possible”, “could we buy a villa in Tuscany”, “this is such a lofty dream”, “the euro exchange is terrible”, “what about our personal and professional responsibilities”, “what about…what about”…….

At the end of the conversation we had agreed, we would move beyond being a tourist in Tuscany, purchase in the area of our dreams and immerse ourselves in the incredible Tuscan culture. A testimonial to the effects of a good cup of hot chocolate.

As Mark Twain pointed out, “You can’t depend on your eyes when your imagination is out of focus.” So we had moved beyond by our imagination and into the realm of the possible, charting our own course. As I looked over the Val d’Orca, still holding onto my husbands hand, I did not have a single regret.

Perhaps if your imagination is out of focus, you may simply need a walk down Via della Fortuna so you may see again. 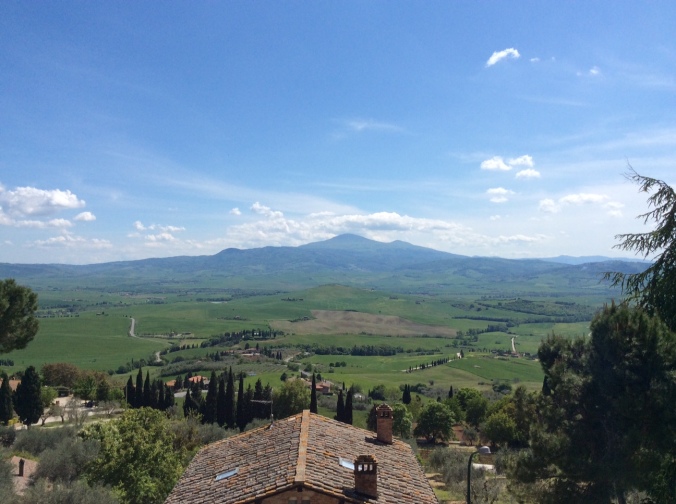 A spectacular view from Pienza.

7 thoughts on “Pienza and Way of Luck”