We had taken our visiting friends on the strenuous walk, climbing the white road leading to the ancient hilltop village of San Gusme. It was time for a morning caffè (coffee), as well, we had to work off some of the fabulous Vino Rosso (red wine) and local Tuscan food we had been indulging in over the past several weeks.

As we left San Gusme we entered the small local cimitero at the top of the road back to the Casale. I thought it would be interesting for them to experience how Tuscan’s respect and remember their loved ones who have passed away.

Entrance to the San Gusme Cimitero

Cross at the top of the white road to San Gusme.

An older lady dressed in a full nonna (grandmother) apron was washing the white dust off the tombstones and polishing them until they glistened. With a white cotton cloth in hand, she was making her way around the cemetery, watering and tending to the plants and flowers.

The cemetery was “vivo”(alive) with flowering plants which were planted in front of the grave sites or sitting in decorative pots. The Caretaker was also giving direction verbally and with hand gestures, punctuated by her cleaning cloth which she was flicking in the air.

The instructions were directed at workers from the local town who she mildly admonished for something. The Caretaker was laughing and smiling as she did so, but the message was definitely getting across to them.

Knowing that we were overhearing the conversation, one of the workers came over to me and asked “sei inglese” (are you English), he appeared relieved that we could not understand the full extent or source of her discontent. He chuckled and shrugged his shoulders as he walked away.

The cimitero was immaculate, permanent lights remained lit in front of each gravesite, as well on the old crypt wall at the back. I found this somewhat comforting as I have never liked the thought of lying in darkness for an eternity.

Each grave had a picture of the person who had passed away. I trust it was their best photograph as some were laughing and others were in a serious pose.

One photograph in particular caught my attention. It was of a gentleman, his family had superimposed his wife’s image on his, after she had passed away. She appeared to be snuggling at his left shoulder.

My husband and I returned to the graveyard the day before the holiday to see if in preparation for Festa di Tutti i Santi (All Saints Day) the cimitero would be different.

As we entered the cemetery there was a man and a woman planting a new assortment of plants, their basket was full.  Not wanting to intrude, we left quickly, ensuring they could share this private time.

Upon leaving the grave site, we noticed a monument dedicated to seven people, each name etched in stone, with their anni (ages) below. The ages ranged from 1 year to fifty-three years of age.

How had we missed this monument on prior visits? Perhaps it was due to the many plants covering the front of it? I welled up as I looked at it.

I have been filled with many emotions looking at the beautiful sculptures that man had created at the Borghese gallery in Rome, the tree of life in Lucignano…. this time it was different.

On the Villa Arceno Estate the Pallazzaccio is the site where this tragedy occurred.

The back of  the memorial reads “Se Ci Ricorderete Non Saremo Morti Invano” (If You Remember Us We Will Not Be Dead In Vain). We remember you this day, rest in peace.

This past Wednesday, was Festa di Tutti i Santi (All Saints Day) in Italy, a national religious and public holiday in this predominantly Catholic country.

All Catholic Saints are celebrated and illuminated red plastic candles and wax pillar ones could be found for 1.5 – 2 euro in local food shops and markets. Each with a different face of a favourite Saint lit and prominently displayed in churches, windows and on grave sites. Shall we pray to the Saint of Peace?

For some reason I have not visited my parent’s gravesite on a regular basis.  The gravesite is sterile and devoid of the joy that I feel when I think of my parents. I have asked myself “Why then do I visit the cimitero in San Gusme?”

Sergio the kind gentleman “man of the land” who takes care of our Tuscan property planted a rose bush in my cucina garden this week. “Dove ti piacerebbe piantare”? (Where would you like it planted?), I motioned to a spot between the rosmarino (rosemary) bushes, lavanda (lavender) plants and herbs. 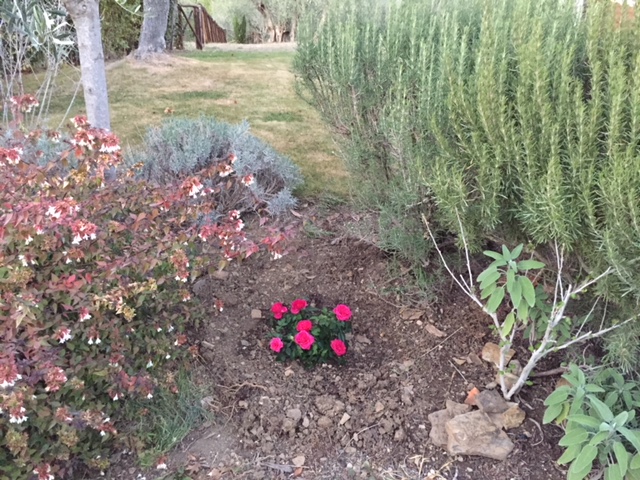 The plant was given to me by my husband for our anniversary this past month. For the past 22 years he has given me a rose each month, on the fourteenth day, the day we were married.  Now this rosebush given to me with love has been planted in remembrance of my mother who passed away on October 30th, twelve years ago.

The Tuscan tradition of remembrance with planted  fiori (flowers) has settled in. I now have a joyful place for remembrance and reflection. I remember you Mum, rest in peace.