Si, Si (Yes, yes), I said, nodding rapidly to ensure he knew that I understood. This was the third time he had repeated the day and time, this following writing both on a piece of paper.

You see, Francesco speaks no English and I speak an estimated 4% (exaggeration) of the Italian language. A perfect opportunity for a “mix up” to occur. When Francesco and I lay eyes on each other, the same fleeting look of “Oh no,” fell  across both our faces as our eyes search desperately for our spouses. They each speak enough English and Italian to get by.

However, I like to listen to Francesco talk as he speaks such beautiful Italian. His words simply roll perfectly together, like an old-fashioned romantic melody. Italian after all, is one of the romance languages.

“To have another language is to possess a second soul.” ‒ Charlemagne

On Monday, my husband and I climbed into the vehicle following a quick caffe and our standard dolce, biscotti con noci (biscuits with walnuts) at Bar Centrale, Castelnuovo Berardenga (Bar Centrale SNC di Meniconi Silvia & Co on Facebook) 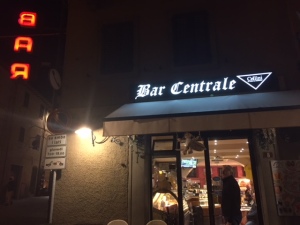 biscotti’s with walnuts. Thank you.)

The owner Silvia greeted us with a warm smile, further enhanced by red lipstick applied to perfection. Her smile is one of the reasons we go to the “Bar”,  as others do, they simply look forward to seeing and being greeted by Silvia.

Silvia efficiently took our order, graciously correcting our “caldo” pronunciation today, while immediately heading toward the biscotti jar located at the end of the glass display case.

Not surprised by our order, she made a joke about our “colazione” (breakfast) being very consistent.

The bar was busy as usual, the regular customers were laughing and joking as they got a solid start to their day, munching on pastries and flinging back black espresso.

With directions in hand, we were off to Montevarchi.  We were to meet Francesco at 1:30PM  and I was not going to be late, I had something to prove (my IQ!).

The car came to a full stop at 1:15PM and I could see Francesco’s truck sitting inside the gates of his business, Ortobello. Ortobello is an excellent garden centre where I buy my healthy flowers and plants for my garden.(http://www.ortobello.eu)

In the distance I could see Francesco is riding his bicycle toward us, his peddling slowed as he approached the vehicle.

With a broad smile he said, “gli stranieri sono molto precisione” (foreigners are very precise) and pressed his forefinger and thumb together, drawing a vertical line in the air, a reference to the time. Perfect I thought, as a sense of satisfaction began settling in.

After quickly packing the car with stainless steel olive oil canisters, we proceeded to follow Francesco’s truck. The truck was full of Casale Montecchio olives to be pressed at Bartolucci Orlando Frantoio located in Mercantale Valdarno.

The Frantoio building was a simple warehouse and all of the doors at the back of the building were open. The sounds of busy machinery could be heard from inside. 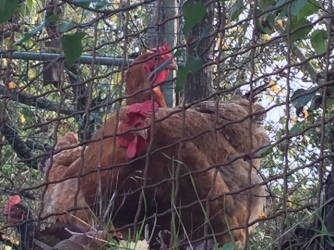 A chicken coop in the adjoining yard.

Each truck had to be weighed before unloading the oil canisters.

I was thankful I had thought to wear an extra sweater as the day was cooling. I shivered as I pulled the front of my sweater closer together.

A growing pile of olive leaves was in the yard with a steady stream of leaves coming from a pair of pipes overhead. The pipes resembled a pair of jeans hanging on a clothes line, the leaves

still had that wonderful olive scent.

The work began shortly after arriving, our appointment was for 2 PM and there were many men patiently and impatiently waiting for their olives to be pressed or the process to be completed. The men were dressed in camouflage hunting pants and well-worn pants with sweaters as well as, a few had short brimmed hats to keep their heads warm.

Francesco had a brief conversation with the Supervisor of the Frantoio, Domenico, I overheard Francesco tell Domenico that we are “Canadese” (Canadian).

Domenico immediately approached us, greeting us warmly and gesturing for me to follow him. I immediately followed in hot pursuit, leaving David and Francesco behind heaving the olives from the heavy crates into the hopper. Perfect timing.

For the next half hour, I followed Domenico around the building using non verbal signals to communicate due to the noise and the language barrier.  I asked “posse fare fotografie”? (can I take photograph’s), he nodded his approval.

Admittedly, I was the lone female in the crowd and wary glances and full on stares, begged the question; what are you doing here?

The filling hopper slowly released the olives and leaves onto a conveyor belt where the olives, leaves and twigs were separated. The precious black and green fruit received a well deserved bath after their long months languishing under the Tuscan sun.

Then the crushing process commenced, and Domenico lifted the lid so I could see the churning contents. Then again, as the  “pumice” deepened in colour. 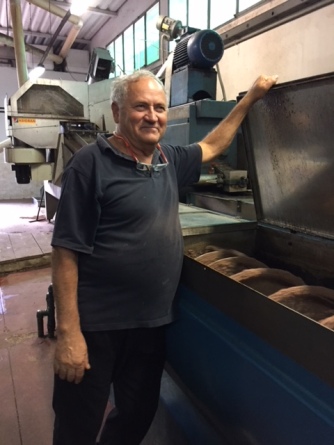 Once the pumice was thoroughly crushed and with the olive oil separated via a high-speed centrifuge, the olive pits, pulp and skins were piped out of the building into a pile. 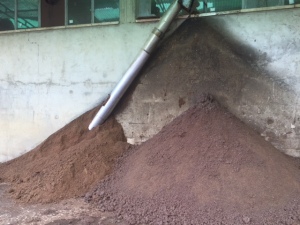 Picking up the pumice, I smelled it and the  pure aroma of olives remained.  I rubbed the mixture between my thumb and fingers to see the results of the crushing. The pumice can be used for fertilizer, burned as a heat source or for soap making.

Knowing I shouldn’t, I sampled a “bit” of the pumice and Francesco next to me grimaced. ….olives “straight” up are not pleasant.

The gentlemen waiting for their olive pressing, stood watch over their precious olives and containers.  They had brought their prized fruit in crates, in burlap bags tied with twine or simply in baskets. Deep conversations occurred while they watched their olive oil pouring into the large vats.

As Casale Montecchio’s pure extra virgin olive oil (EVOO) began flowing from the faucet and into our assigned vat, I could not help beaming.

Francesco and I stood peeking over the filling vat and motioning our hands towards our noses, the perfume from the olive oil was wonderful.

The stainless steel containers were weighed before and after filling to ensure the integrity of the process.

As Francesco filled the containers with olive oil, Domenico came over to say his goodbyes. Both Domenico and Francesco explained how to best enjoy our first taste of EVOO; toast the bread over a chestnut fire, brush with a clove of garlic, lightly pour the oil on the warm bread and add salt. The message was clear, there was nothing that could match the flavour of freshly pressed Tuscan EVOO. Now they were beaming!

As we finished packing the car, I turned to Francesco and said in Italian “questo è stato il giorno migliore, grazie mille.”(this was the best day, thank you very much) and he nodded, I believe he understood me (perhaps).

Through the rolling Chianti Hills and around the twisting turns of narrow roads, the olive oil sloshed in the containers. We fretted, over spilling a single drop of oil in the back seat of the Alfa Romeo, a car definitely not built for transporting olive oil!

That night while enjoying the EVOO produced by the olive trees of Casale Montecchio, we toasted the quality of the yield.

“Lucifer’s” attempts to spoil the Tuscan olive harvest had failed, Mother Nature had once again prevailed.